The Rest of August

The kids spent two more weeks at summer camp.  They went to Imprints camp the 2nd and 3rd weeks of August.  The 2nd week, during VBS, was the Wide World of Sports themed week.  They went bowling, to play kickball and to Tanglewood pool.  It was the first time Lindy had gone.  She took the swimming test and got the yellow band.  That meant she could do the whole splash pad area, the lazy river and the slides.  She could not go in the big pool - which was fine with me!  They had a blast and were exhausted by the end of the day.  That weekend the kids got to go to Macy's with me for the Shop for Cause event that benefits the March of Dimes.

The 3rd week of August the theme was Around the World in 5 days.  It was kind of like the VBS week.  They made passports and played games from different countries.  They went to a splash pad one morning and had a pizza party there, went to High Point City Park, and back to Tanglewood pool.  We went to the Honeybee Festival at the park across the street on Saturday afternoon.  We didn't stay but an hour because it was so crazy hot out there.

The 4th week of August was grandparent camp.  We are thankful to have grandparents around to take the kids a couple days so they don't have to go to camp the last week of summer vacation.  We like to share the wealth though so they spent from Sunday evening till Tuesday with Bob and Suzette and then from Tuesday to Thursday with my parents.

GrandBob took Will back to the Nascar Hall of Fame, Will's new favorite place.  He likes doing the simulator.  Lindy and Suzette hung out at home and visited with the dogs next door and a neighbor as well.

Monday was also the once in a lifetime Solar Eclipse!  There was so much press leading up to the event that we of course fell into the hype.  Part of me hated to not be with the kids to experience it together but it just didn't work out.  After the event, I totally regretted not going to SC to witness totality.  WS was in 95% totality and Charlotte, where the kids were with GrandBob and Suzette was in 98%.  We thought that was pretty dang close to totality.  But we all underestimated 3-5% of the sun.  I watched it in a parking lot with my co-worker, Meghan, Lynn, and another guy that works for JDRF, Eric.  Eric and I had a meeting at 3pm we had to go to so we were outside watching the whole event and we just walked in after the peak.   The kids watched with GrandBob and Suzette.   I threatened them with their lives not to burn my children's retinas.  I had glasses that were safe (which was a story actually.  The local Science center sold uncertified ones - which I had bought when the kids were in camp.  Thankfully they were able to replace them for us for free) and I made a few different pinhole projectors.  I also made the paperplate glasses holder so they wouldn't look over the glasses.  I was seriously concerned about Lindy.  I could just see her taking them off or looking above the glasses.  I was concerned about Will too but Lindy has enough vision issues that I wasn't playing around with her vision.  I'm happy to report they came home with no damage - well done GrandBob and Suzette.  It was neat but I wish we had gone to SC.  Videos from totality were so neat.  It just seemed like the beginning of dusk around here.  It was kind of an eerie light but we were definitely underwhelmed.  The neatest part was watching the moon inch in over the sun.  Totality was a busy for me.  Drew was up in Stokes County at the Walnut Cove Library and ended up watching in the parking lot with some random people who had driven over from Greensboro because it was raining in Greensboro.  My sister and family were in totality in Kansas City.  Lucky ducks!

While the kids were gone Drew and I ate out a couple times and we went to the Winston-Salem Open tennis tournament on Tuesday night.  We wish we could have taken Will again but it didn't work out this summer.  We still enjoyed our night out.

Bob and Suzette met my parents on Tuesday and my parents took over after that.  They did a good amount of swimming while with my parents.  I can't remember what else.  My parents met me in Clemmons on Thursday afternoon for the hand off.

I grabbed the kids and we headed straight to the kids' 10 year well child check ups at the pediatrician's office.  Everything checked out well and we had some of the most exciting news ever.  Will gained 7 pounds since last year's visit!!!  That is the biggest weight gain either of the kids have ever had.  I don't see Will really eating more at meals, but we did add a protein bar and glass of milk as a bedtime snack and I feel like that may be making the difference.  We do let him eat more 'crap' with calories than we used to which has helped I'm sure.  Lindy measured in at 52lb 3.2oz and 4'1".  She gained and grew as well, the pretty standard couple inches and couple pounds my kids normally do.  Will measured in at 46lb 3.2oz and 4'0.43".  Will closed the weight gap a little but Lindy officially passed him in height - she is a 1/2 inch taller now.  She has started looking much taller and leaner the older she gets.  Many people commented on her growing over the summer.  It wasn't some huge growth spurt over the summer but she is looking taller and leaner.   No shots this year.  No boosters needed and flu shots were not in yet.  The kids were happy about that!

I took the kids to the Greensboro Science Center on their last day of summer break.  I took the day off to spend with them.  We headed there in the morning and spent a few hours exploring.  It was hot out so we didn't do the whole outside zoo part but we made it through most of the inside.  The kids definitely like the hands on things better than the animals there.  They liked to play more than look.

Saturday we celebrated Ed and Brian's birthday at Mimo's house - except Brian wasn't able to come because of work. We had dinner and just hung out.  It was nice to see Corbyn and Molly and they allowed me to take a picture of all the grandkids!  A miracle to get them all together and capture it! 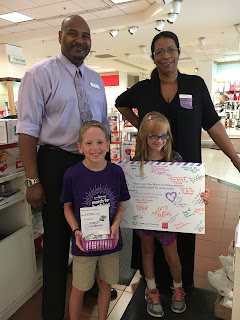 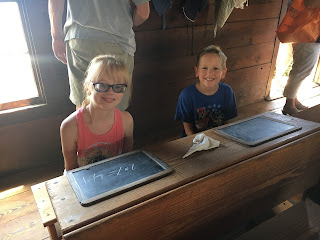 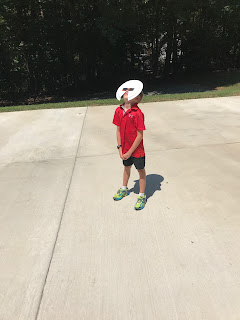 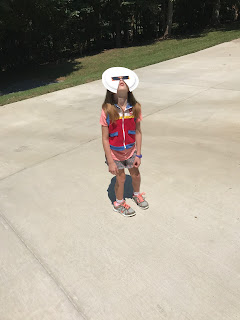 Lindy and the neighbor's dog 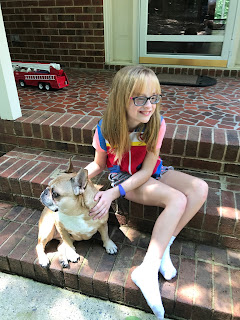 At the Nascar Hall of Fame 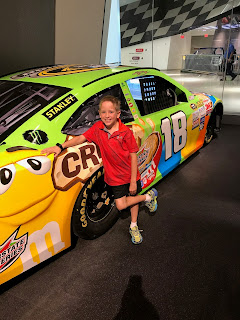 Meghan and I watching the solar exclipse 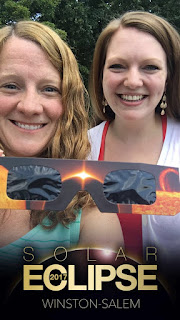 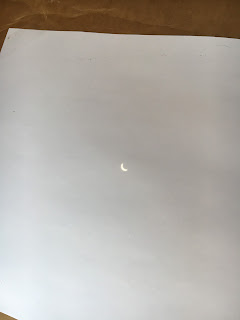 At the tennis tournament 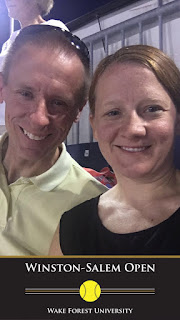 Friday at the Greensboro Science Center 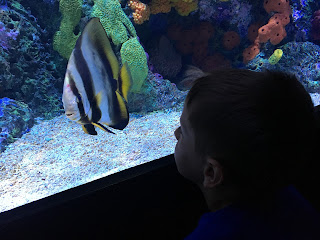 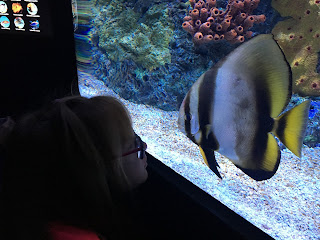 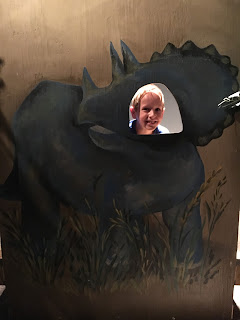 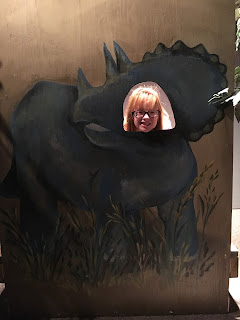 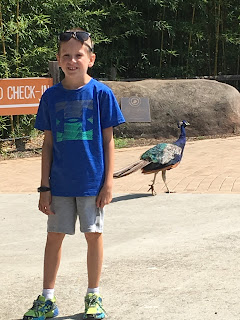 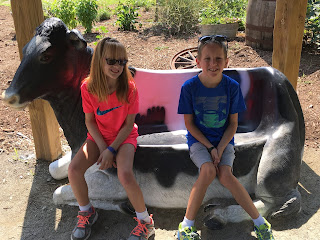 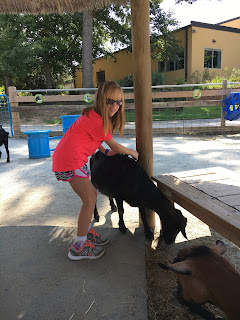 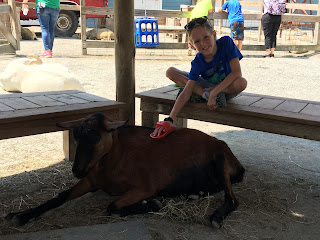 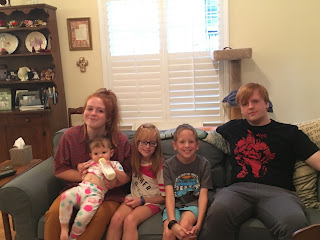 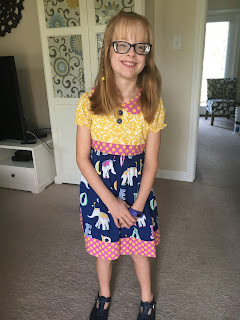