Will’s first day of preschool was a complete success!  He was so excited and he didn’t cry AT ALL!

We got him up with Lindy and they ate breakfast together.  Then I took Lindy to school and Drew stayed here with Will.  When I got home we had a few minutes and then we left to take him to school.

We got there and he was so excited.  He immediately started talking to the guy at the receptionist table.  He showed him his backpack and told him who his teachers were.

At 9am they opened the doors and we walked to his class.  Miss Brandi greeted him at the door and we went into his classroom.  He immediately started playing, even with his backpack still on.  We found his cubby and hung his bag up.  We both told him bye and he was fine.  He went on playing.  There were 3-4 other kids in there when we left.

I did have some news to tell his teacher, Miss Bobbye, before I left.  I got to tell her that Will hasn’t been drinking any thickened liquids all weekend long.  I had stopped thickening their milk a couple months ago but I ended up having to start thickening it again.  I decided to try again this weekend with milk and water and he has been fine!  So he didn’t have to bring any special drinks with him on his first day of preschool.  This is huge!  I did tell her he hadn’t ever really drank from a regular cup, that we have always used straw cups.  I had thrown one in his backpack just in case they needed it.

We left and came home to a completely quiet and empty house.  Now that was strange.  But I think Drew and I got a good bit accomplished in our 1.5 hours at home!

We left a little after 11am to go get Lindy and we then headed to Will’s school.  We had to wait a little while and I finally went in to get him.  They said he did well, never cried, and drank water from a big boy cup and out of the water fountain.

Tonight at dinner he was telling me random stuff about the day.  He told me he had pretzels and a cupcake at school.  Which I think he actually did because I think it was another boy’s birthday.  He also told me he had to be quiet at school.  He said he didn’t talk while Miss Bobbye talked.  I wonder if she had to tell Will to be quiet or she was talking to the whole classroom????!!!!

Here are pictures of his first day!

Showing off his backpack! 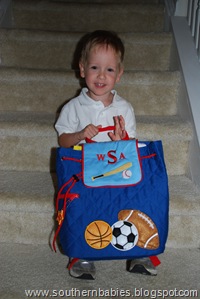 First day both kids are off to preschool! 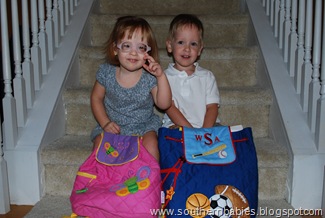 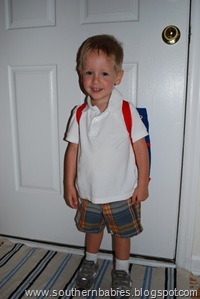 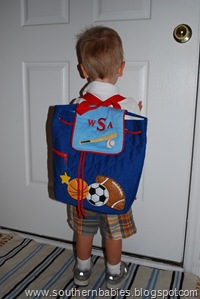 Lindy wanted to join Will in facing the door! 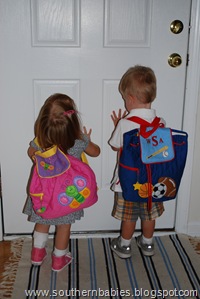 Will and Daddy read lots of books while waiting for me to get back from dropping Lindy off. 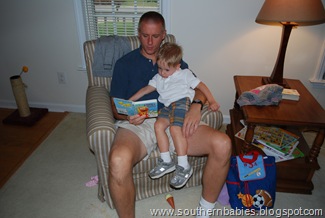 Heading out the door! 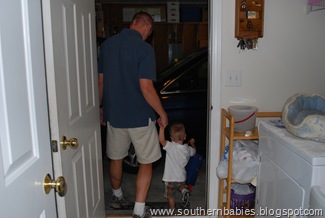 So excited to head to school! 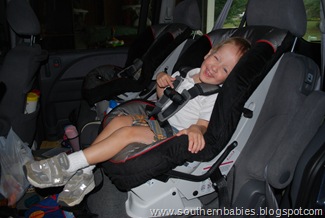 Outside his new preschool! 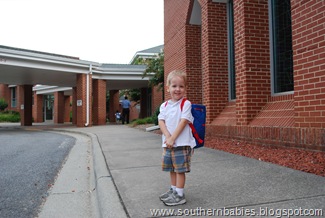 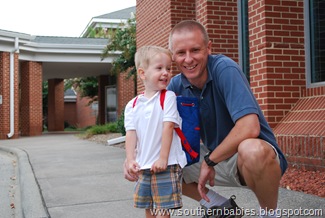 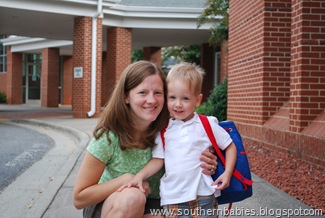 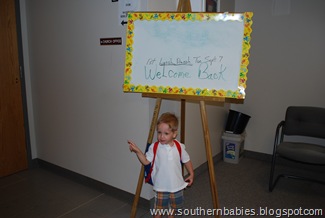 Checking out the fish on the way to his class. 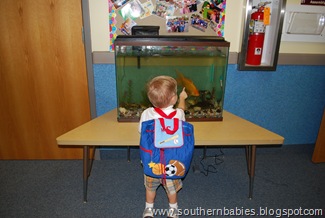 In front of his classroom door. 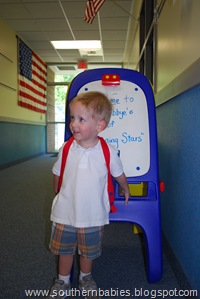 Standing in front of his cubby. 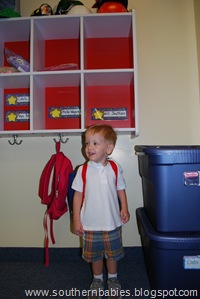 Waiting in the parking lot for brother to get done with school! 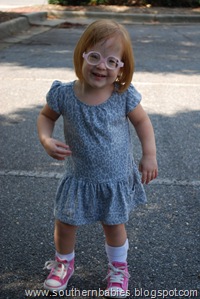 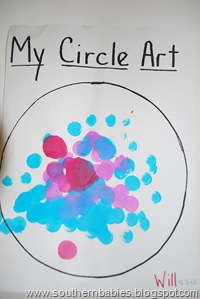 I had fully expected today to go horribly.  All summer he has screamed when I have left him in the church nursery.  This past Sunday on the way to church I told him ‘NO crying.’  I told him that he could go play and have fun and that I would be back to get him.  Something clicked.  He went to children’s church happy as could be.  A drastic change from the rest of the summer.  I think he finally understands that he gets to have fun and that I come back when he’s done.   Perfect timing for him to get it!  Two days before his first day of preschool.  It was so awesome to drop off a happy boy instead of the boy who was clinging to me all summer.  He was happy so we were happy!!

Of course Lindy was happy first day of preschool – and has cried every day since when I leave her.  So things could go worse on Thursday!