Last week was supposed to be a busy week but it actually turned out pretty quiet. We prefer it not being too crazy.

We had a pretty neat trip back to the NICU on Monday morning. The NICU opened up a new intermediate nursery (where babies go to feed and grow before going home) last June. To decorate, they hired a professional photographer to come take pictures of some NICU graduates. Lindy and Will were asked to be on the wall of graduates! For agreeing to have their pictures taken we will get a cd with all of the photographer's pictures on it that we can print anywhere. I never pass up a chance to get pictures taken! We got to see a lot of our old NICU nurses while we were there, including two of our favorite primary nurses, Cheri and Paige. Call us crazy, but we like going back to the NICU. We like seeing everyone and hearing the oohs and ahs!

After we left the NICU Lindy and I headed to PT to get her other brace. She now has both her braces and we are supposed to practice standing in them 15 minutes every day. It doesn't sound long, but it is. She doesn't want to stand for 15 minutes straight so it's up and down, up and down. And then I usually have to stop and fetch Will a couple times. The time drags by. Hopefully it'll get easier the more stable she becomes in them.

On Wednesday we had a visit with Governor Morehead. When we started with GMPS we had Susan as our teacher but eventually we switched to Lesley. Lesley just had a baby and is on maternity leave so we will have Susan back for a couple months. She was excited to see Lindy and see how much she has changed. She couldn't believe all that she was seeing and doing. It was nice to catch up with her.

Master Will has been one cranky little dude this week. But for good reason. Wednesday night I was cleaning his gums in the bathtub and I found a molar had come through! Poor guy was cutting a molar and I didn't even know. I've been watching a tooth up front and hadn't even realized his molars were anywhere close to coming in. The tooth I have been watching is so close now to cutting through and I think his other top molar is close to breaking through. He constantly has his hands in his mouth these days. Will also had a first this week - his first bloody experience. Last Sunday he was trying to scoot between two kitchen chairs and he got tangled up in the legs of them. He fell face first onto the kitchen floor. He cried and we tried to tell him he was okay and then we saw he was bleeding. Poor guy had a rough week.

Lindy also had another molar come through, this one on the bottom left side of her mouth. Unlike her brother, teething doesn't seem to bother her. Last Sunday Lindy got herself up on her hands and knees when she was in her bed. We are still hoping she will crawl on her hands and knees so we were excited about that. Lindy has learned how to give hugs this week. Nothing is sweeter than to see them lean into your shoulder for a hug. It's pretty sweet when I ask Lindy for a hug and Will hears me and comes from across the room to give me one. Then I have two sweet babies giving me hugs. Melts your heart! Lindy has continued to suck pretty well on her straw bottle. The biggest problem is that she isn't very consistent with how much she drinks. On Wednesday she drank 16oz from a straw bottle and only 2 from a regular bottle. Thursday she drank 5oz from a regular bottle and today she drank a lot from the bottle. She's slowly but surely getting there.

Today Drew took the babies to visit one of our church members so that I could get some cleaning done. Louise has cows out in her pasture so they got to go check them out. Drew said they enjoyed watching them and being outside. The good husband he is, he took pictures for me!

When I started this post I didn't think I had taken many pictures this week, but who am I kidding. Of course I took lots of pictures! Have a great weekend.

We got a new side by side double stroller a couple weeks ago and we finally put it together. How stinking cute are they?! Lindy doesn't love the straps but she does love seeing Will so close! 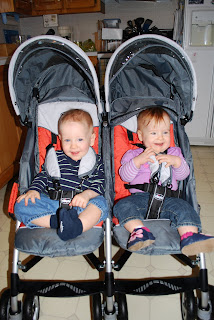 He's so close she can easily get his ear. She loves his ears! 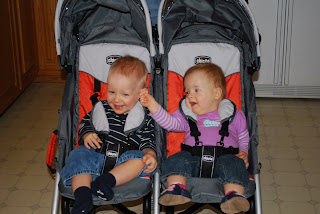 The big girl can even drink out of regular straw sippy cups now! 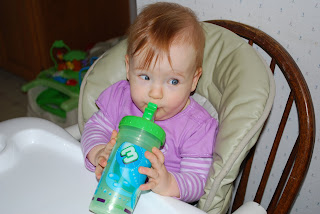 A caged monkey for sure! 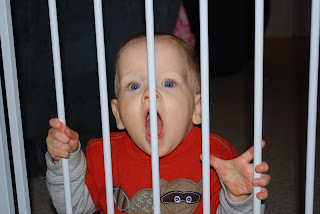 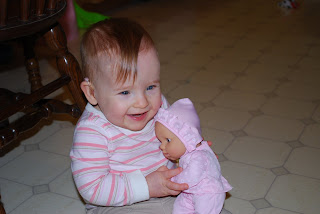 Will was still trying to wake up from a nap. 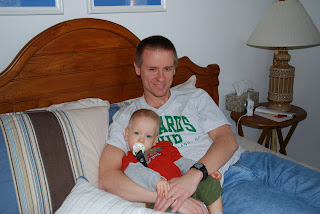 No, he wasn't eating cookie dough! We use the bucket to store their blocks. He likes the sounds he can make. 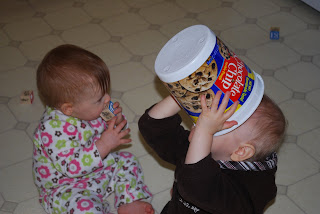 Two different times on this day Will took off one sock. I don't know if it was on purpose but it seemed that shortly after Lindy saw Will with one sock, she would then take off one sock. It was probably just coincidence but it was kind of funny to look down and see both of them with only one sock on. 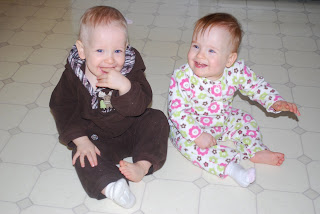 Silly girl - holding the pig with her teeth. 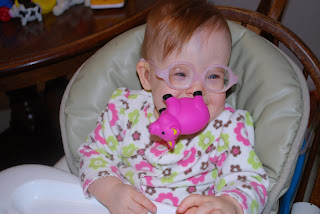 It's hard to see because of the blanket - but she is up on her hands and knees! 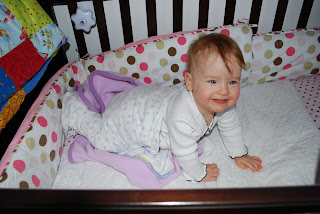 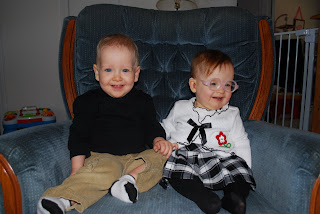 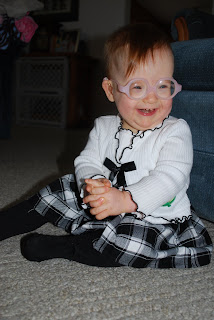 Will made himself comfortable - right on top of Lindy! She didn't seem to mind though. 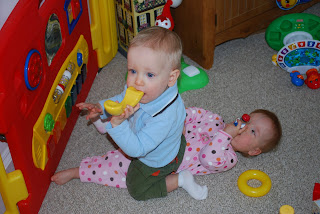 Drew and kids on their field trip today. 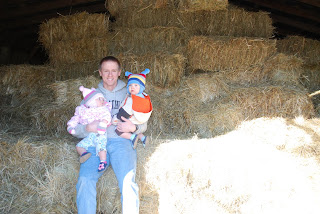 Louise with the cows and kids. 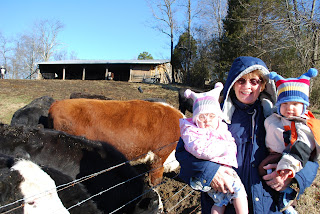 Check out the cow trying to get Lindy's hat!! 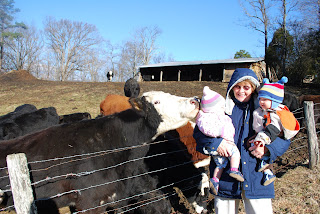 Those babies are just too stinkin' cute!!!! Maybe Lindy likes to grab Will's ears so much because someone's always messing with her ears and hearing aids. She doesn't want his ears to feel left out. And what are you going to do when they are too big to fit in that chair for pictures?

I find myself wondering how you catch all these pictures that are so cute! What do you do walk around with the camera in a gun holster, and point and shoot when you see an opportunity? Usually by the time I get my camera out and ready, my kids have already moved on to something less interesting, and I have missed my golden opportunity. Not you though - you catch every one! Keep them coming - I love checking out how the babes are doing and getting to see them in action!

Hey, I'm Anita's cousin Beth. Just an idea about standing Lindy in her braces. My son, Joseph, had to stand in his braces for about 15 minutes at a time. He actually had to stand strapped to a body board (which was on loan from physical therapy). We had success at standing him in front of a mirror so that he could see himself. He seemed to love this. Not sure if this will work for you, but I thought I would pass along the idea. By the way, Lindy and Will are SO precious. Thanks for sharing them with us!! I feel like I've walked your same road...although for about 17 months I walked the road with only one baby.