The month is almost over.  They go so fast.

Yet somehow last week went by fairly slowly.  I kind of liked it.  The week was quite boring.  I took dinner over to Ed and Jamie on Monday at lunch and got to lay eyes on Ellie.  Stupid runny nose and sore throat kept me from holding her.  Pure torture to be around her twice and not hold her!

Wednesday the kids had an early release.  The afternoon was full of crazy thunderstorms.  We had a major storm for about 10 mins and then it blew on.  It caused crazy damage all over town.  Little did we know that it took trees down which then took power lines down right outside the kids' school.  We pulled up to the stoplight on Thursday morning and it was out and police were directing traffic.  We were so confused when we pulled up to the buildings because the classrooms were dark but there was a light on in one hallway (later we found out it was an emergency light).  There was no power!  There had been a robo call that morning - which we didn't get - that said the power was out and to bring flashlights.  I'm 100% sure they thought we'll bring them to school and the power will come on at some point - but it didn't!  They went all day with no power at school!  Thankfully it had been 70F the day before and wasn't very cold outside.  The kids thought it was great!  They normally go to afterschool on Thursday but I went to pick them up since they had been there all day in the dark.

Thursday morning Lindy did go on a little field trip with her vision teacher and friends from school.  The visually impaired camp she attends in the summer received two new buses and they had a celebration of the buses arriving.  The news was there and Lindy was on TV that evening.  She was so excited about her field trip.  She woke up 30 mins early that morning!

Our weekend was a fairly quiet one.  We went out to eat Friday night - against our children's wishes.  They are such homebodies.  Lindy hates to go out!  Will wanted cereal for dinner and therefore didn't want to go out.  We forced them to and they both enjoyed their meals!  Saturday we spent the morning cleaning and exercising.  We cleaned up Saturday afternoon and went downtown with my boss and her boyfriend while her daughter babysat the kids.  We had a great time and the kids did too!  Today we've had church, laundry, and we took a walk because the weather has been beautiful this weekend.

I took almost no pictures.  Here are the couple I took.  Actually I didn't take any of them.  Drew took the two of Lindy on the trampoline with her crazy static hair and Lindy's vision teacher took the other two at the fieldtrip!


Lindy and her pals at the fieldtrip on Thursday.  Standing by one of the new buses.﻿ 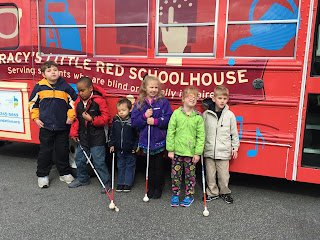 Lindy and her friend Khloe.  Apparently she was cold! 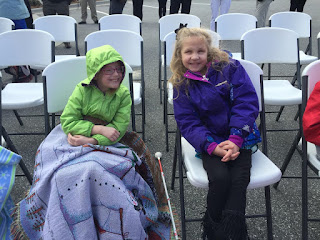 ﻿
﻿
Lindy had a wee bit of static on the trampoline on Saturday!  Aren't these pics amazing?! 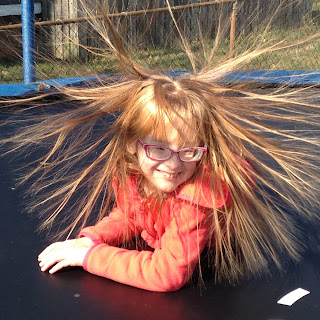 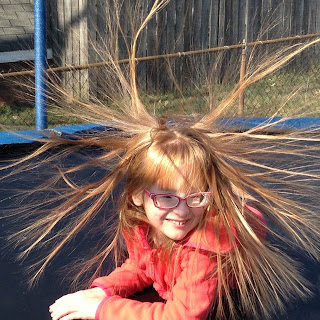