After our first week of kindergarten, we all needed a three day weekend to recover!!

The first week did go well.  Lindy’s behavior sheet showed green each day – and green is what you want.  Will’s behavior sheet has stamps for every activity – and you want stamps.  They learned a lot of rules this week!  Every special they went to I would ask what they did and they both said, “We learned the rules.”  I think things will get a little more fun after getting through all the rules.

Wednesday night Lindy told me she got a new desk because she was having trouble seeing the board.  I asked her if she was by herself and she said yes but she talked about how much she liked her new desk.  Thursday morning when I dropped Lindy off her teacher said Lindy was having trouble seeing the board so she put a single desk right up next to it.  She told me that Lindy loved her new desk.  She asked if I was okay with her moving up there.  I told her definitely, we need to do what is best for her to see.  She said she loved it so much though that she never wanted to go back to the table to be with the other kids, even when they weren’t using the board.  I thought about it all day and I talked to her teacher about it after school.  I met with both her assistant and her teacher and gave them a little hearing aid tutorial on how to change batteries and put her hearing aids in.  Just in case she rips them out.  We talked about her desk and we agreed that when they aren’t using the board Lindy should go back to her table with her other classmates but would sit up there anytime they were using the board.  I think that is a good plan.  Her assistant said she had gotten a couple questions on why Lindy sounds like she does or what her braces are.  They both said that kids want to hold her hand and asked if that was okay with me.  Her assistant said, the kids love her and want to hold her hand.  I am fine with it but I told them the problem occurs when they walk so much faster than her they end up pulling her and she falls.  It was nice to get a chance to just talk to them for a few minutes.  I really like both of them and I think they are working hard to make it a successful year.  They are watching her close on the playground which is good.  I’m feeling much more relaxed about the whole thing.  But they haven’t gotten into too much work yet so there is still stuff to worry about!

Will has had a good week as well.  He has brought home much more work that they have been doing.  They are reviewing letters and he has had a coloring sheet each day.  He asked the other day if his assistant teacher could come over to our house.  Ha!  I told him teachers don’t usually hang out at their students’ houses!  He made them a sign this weekend that says ‘I love you.’

All of the kindergarten classes were reviewing colors this week. Wednesday was red day, Thursday was orange day and Friday was yellow day.  It’s funny to see almost the whole class walk down the hall in the same color.

Drew handled pick up the first three days and I did it the last two days.  It was a learning experience for sure!  I picked them up inside on Thursday and finally had to ask someone how it went.  Friday I did the car pool line and it was hot sitting out there!

Friday was only a half day of work for me!  Yippee! I met Katie at Kohls and we shopped until pick up time.  We also went to Costco.  It was nice to not have to hurry home to see the kids or feel guilty about being out away from them.  They were in school!!  Micah goes to the same school as the kids so we both headed to pick our kids up.  She stopped by her house to drop off her groceries and brought me a cold drink.  I love being in the same school as them!  We headed out for dinner as a celebration of the first week of school.  We went to Steak-n-Shake by request and had milk shakes for a treat.  After dinner we headed to Wake Forest and we started at a volleyball game and ended the evening at the field hockey game.  We met up with the Bryants and had a free evening of Wake Forest sports.

Saturday morning we slept in, which was great!  I had to run to Target in the morning and then around 2pm Lindy and I headed to Durham for a first birthday party for Ryan, the son of my first college roommate Joanna.  Lindy has talked a lot about baby Ryan so she came with me to the party.  She had a ball making friends.  She should be a politician someday.   She makes the rounds in a room full of people.  It was fun to see Ryan love his cake!  While we were in Durham, Drew and Will went over to Uncle Ed’s and Aunt Jamie’s for a little party they were having.  Will got to play with the Bryants again and the high light of his evening was the sidewalk chalk.

Sunday we had church and then I dragged the whole family shopping at Sam’s Club.  They had a blast.  ha.  I was the only one who thought it was a nice family trip!

We slept in again today and then I went and did our monthly grocery shopping this morning.  After a few chores and lunch, we headed to Hanging Rock to the Lower Cascades.  I thought the kids had been there before but now I’m not so sure.  It is a really cool spot up in Stokes County.  It’s at the bottom of a waterfall and there is a big wading area.  It’s only about knee deep so it’s perfect for the kids.  The hike is about the perfect length for us.  Will had a blast walking all over the rocks and in the water.  Lindy had fun too but she was so tired of holding one of our hands.  We left her glasses in the car and there was no way she could see some of the big rocks in the water.  I wasn’t about to let her walk all over the slick rocks without holding a hand.  I’m surprised her arm is still in her socket we kept having to pull her up so much.  Despite that part, it was a fun afternoon.  The water was freezing cold at first but it really did warm up.  Will eventually got cold so we packed up and headed out.  We took a nice drive back through the country on our way home.  We are finishing out the weekend with some steaks on the grill!  Yum!

Hope you all had a nice, long weekend!

Red day  (too rushed to take pictures the other color days). 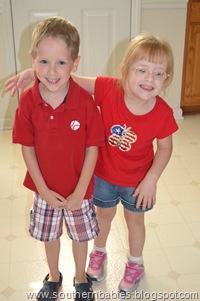 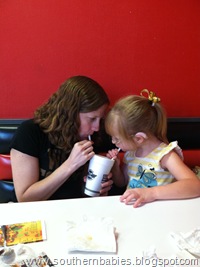 Here is yellow day outfits – which match the Demon Deacon! 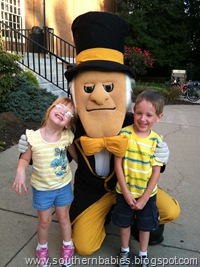 Cheering at the Volleyball game. 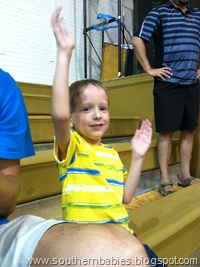 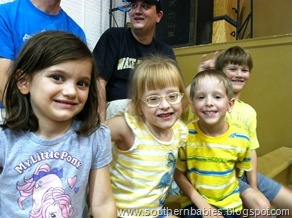 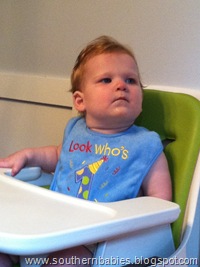 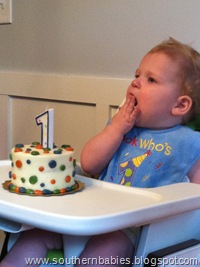 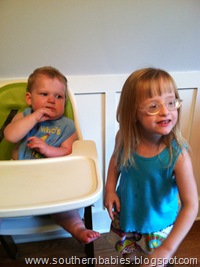 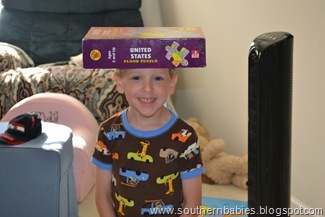 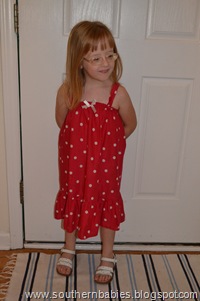 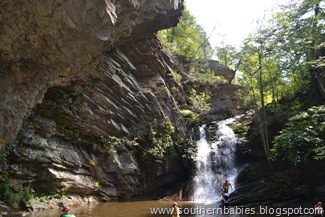 Brrrrrrr.  It was so cold at first! 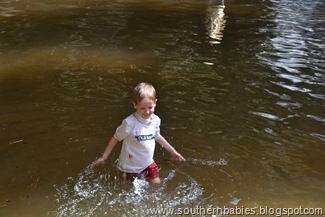 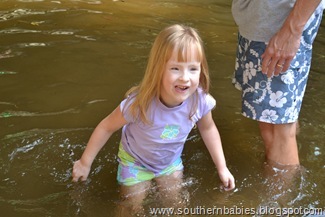 Whoops…  Look who fell in the cold water! 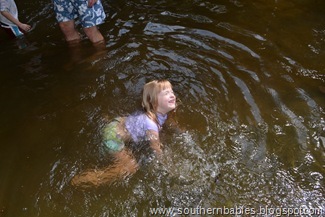 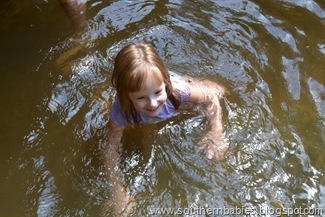 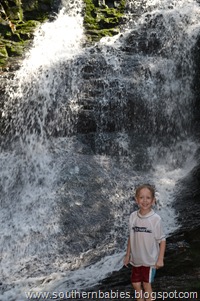 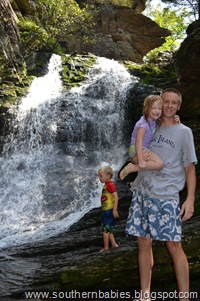 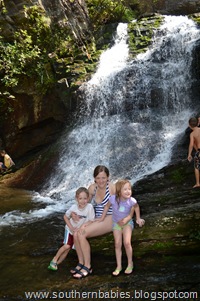 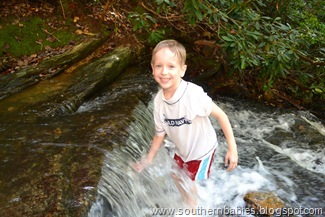 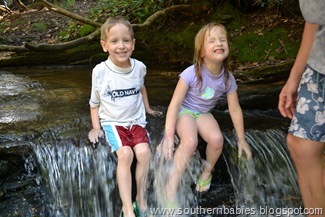 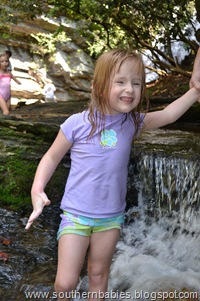 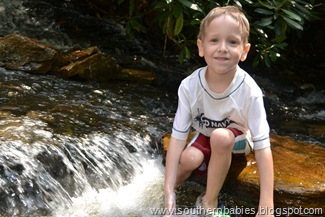 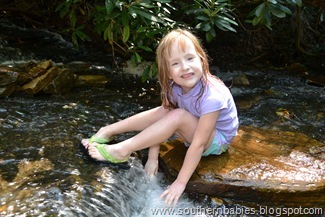 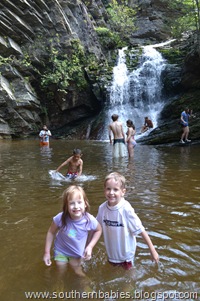 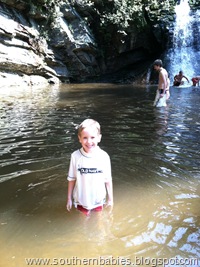 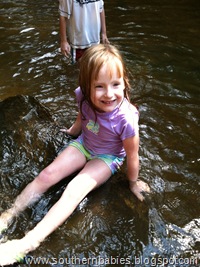