I’m way behind on my weekly updates!  Trying to catch up now.  We had a week where we had no child care so the Charlotte grandparents agreed to help us out and take them for a few days.

Drew drove them down to Charlotte on Tuesday the 25th.  He also took our niece Molly with him and headed to Bob’s house for lunch.  Drew dropped off the cargo and headed home.  My parents came into town that evening so we met them for dinner.  It was a bit strange to not have the kids with us!

The kids spent Tuesday night with Bob and Suzette.  Bob took them to Concord Mills and they played at Dave and Buster’s.  He said they played Ski Ball for a long time.  He said Will did pretty good and that Lindy’s ball would end up about four lanes down!  Bob took them to Toys R Us afterwards and bought them each a toy.  Apparently Lindy insisted on finding a superhero mask.  They searched till they found one.  Will got a new track of some sort.  Sometime after Suzette got home from work and before they ate dinner, Suzette had time to sew Lindy a superhero cape.  Lindy loved it and insisted on wearing the get up to dinner that night.  They went out to eat that night and Will was amazed that they went to a place that had both pizza and spaghetti.

Wednesday morning they got up and Suzette took the day off of work to spend with them.  They took them to something I’ve never even heard of, to Reed Gold Mine.  It was the first documented site of gold in the United States.  Who knew?!  They got to go down in the gold mine and take a tour.  Afterwards they had a picnic lunch there.

I don’t know who this is – I’m guessing a tour guide?! 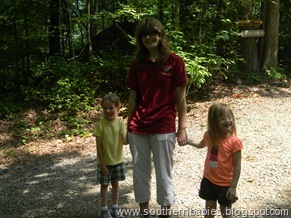 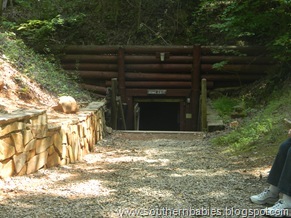 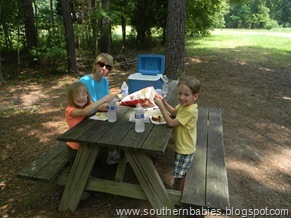 After a fun day at the gold mine, Bob and Suzette delivered the kids to Lynn and Molly.  I think they played with Play Doh Wednesday afternoon when they got there.  I think Bob and Suzette went home and crashed that night!

Thursday Mimo took the kids, and Molly, to Discovery Place in downtown Charlotte.  I’m kind of sorry I missed this.  I’ve always wanted to go!  Lynn said Lindy liked the fish because they were on her level.  She said they both enjoyed this one room – but she was too tired to explain it!  ha ha!  I’m sure they were worn out from chasing the kids around!  She said they spent a couple hours there and finally headed home.

Friday they met some family for lunch at Concord Mills.  Lynn had one brother, Pete, who passed away about 4 years ago.  Pete had two kids, Cameron and Lauren.  Lauren’s family lives in Charlotte but Cameron’s family is currently living in Colorado right now.  Drew hasn’t seen his cousins since Pete’s funeral.  Lauren has one daughter, Isabelle, who will be 5 in August.  Cameron has a daughter, Keelin, who is 6 and a son, Graham, who is 6 months.  The kids got to meet and play with their second cousins for awhile which is always nice.  We got to Concord Mills around 2:15pm and got to see Lauren and Isabelle and Cameron and his wife, Amanda, Keelin, and Graham.  We haven’t seen them in forever so it was nice to visit for a bit – even if it was just a short time.

Play Doh with Molly.  From what I hear Molly was a HUGE help! 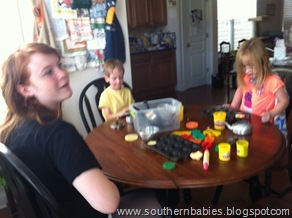 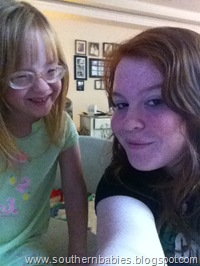 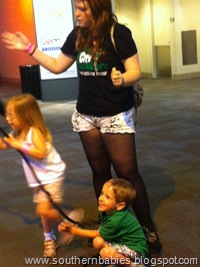 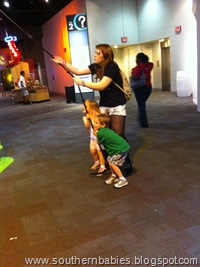 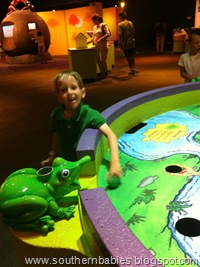 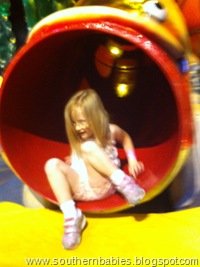 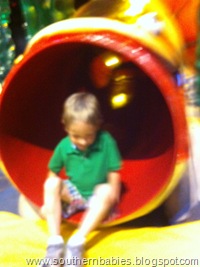 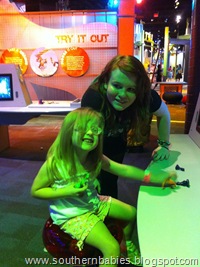 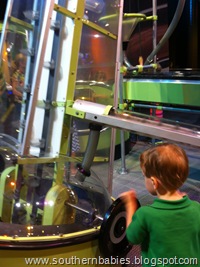 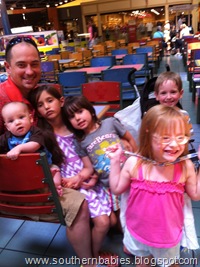 The kids didn’t miss us one bit and did great in Charlotte.  The grandparents are probably still trying to recover!