We got home from Oak Island on Monday evening.  We unpacked and had to clean the house.  The cat peed, the dog peed.  It wasn’t a fun evening.  We have been thrown off all week by the short week.  It’s amazing how short weeks mess you up so much.

Starting on Tuesday morning, Will had to be at school by 8am for Eagle Eye News.  It was finally his class’s turn to do the school wide news program.  They got to pick positions, I think, and Will chose Tech Crew.  The ones behind the cameras, making the magic happen.  We do not get to see him on screen until the very end of the broadcast when they all come out and dance.  Most of his classmates have just had one job the entire week but Tech Crew did it four days last week and they have one more day tomorrow.  He has enjoyed it.  I think he would have liked to try out being an anchor but he’s had fun learning the cameras.  I’m glad we only have one more day of getting to school early.  The first day (last Tuesday) we left in plenty of time but traffic was awful.  Instead of being there by 8am, we got there at 8:10am.  He handled it very well but he was freaking a bit.  I couldn’t believe it happened on the first day.  We’ve left earlier every other day but haven’t had any other traffic issues.

The rest of the week has been pretty low key.  The kids’ homework ended the Friday of Memorial Day Weekend.  They are free birds right now.  We’ve been playing outside a lot in the evenings.  Trying to enjoy it before it gets too incredibly hot.

Saturday our family joined our church for a very neat mission opportunity.  Our church has participated in Stop Hunger Now for years but the kids and I have never gone.  I decided I wanted to help this year and that the kids were old enough to help.   It was a great morning and we all enjoyed it.  When we were finished we had packed 10,152 meals.  We worked for over 2 hours straight.  The kids seriously worked.  They had to take a couple breaks but they really worked most of that time.  Will especially.  He was a runner and he was seriously running most of the morning.  When each station had packed 4-6 bags they would call for a runner who would come get their bin and take it to the weighing and sealing station.  Will worked his hiney off!  When he was tired I became runner and  you didn’t stand in one spot very long.  Lindy did a little bit of everything, including whining.  She wanted to be a runner but I was afraid she would trip and fall and dump the packed, but open, bags.  She helped get the finished bags and put them on the mat and then she helped Drew put vitamin packets in the bags for a long time.  We all went home pretty tired.  I was very proud of them. That is really about the most physical labor they’ve ever done.  And they were doing a great thing while they were working.

I spent Saturday evening shopping and eating dinner with some of my best friends from high school.  Wendy and I rode together and met up with Carrie and Jamie at the outlet mall.  We shopped before heading to dinner and then to get ice cream.  Love those girls and we always have a great time.

Today we had church and then I did our monthly grocery shopping.   After dinner we went to a nearby park and walked the dog for a bit.  We visited the off the lease dog park for about 5 minutes. There were two dogs in the small dog section – although one was not small.  He did okay but then he was jumping on one of the girls and it was thundering and starting to sprinkle so we headed out.  It was a good first try.

Here are a few pics from the week: 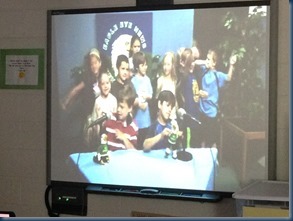 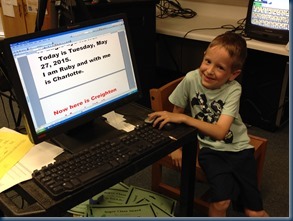 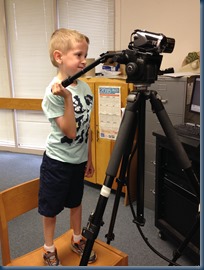 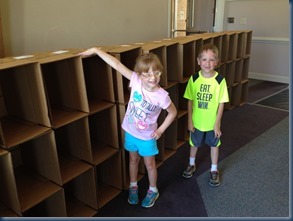 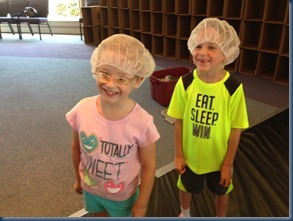 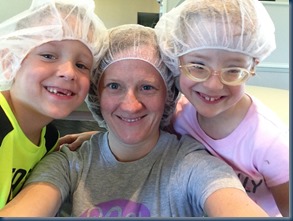 Will tried most jobs that morning.  He was filling packs for me while I was running for him. 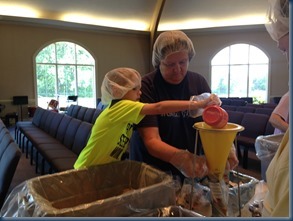 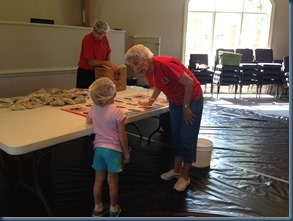 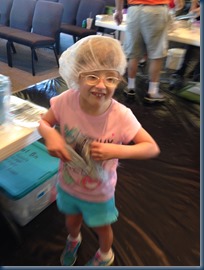 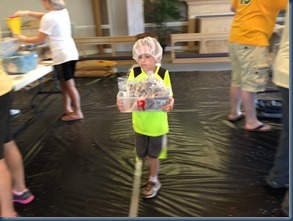 Helping clean up the big black tarp at the end. 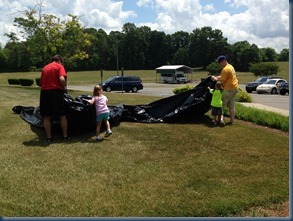 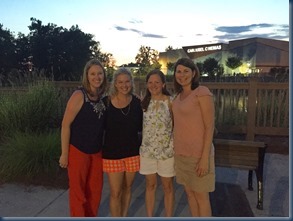